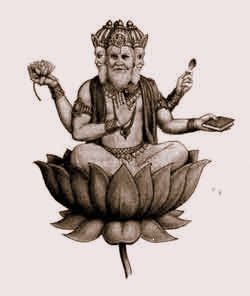 Lord Brahma, the infinite, is the source of all space, time, causation, names and forms.

Theologically, he is the single letter (eka aksharam) AUM, and the uncreated creator (svayambhu), the self-born first person.
Philosophically, he is the first manifestation of one's existence (ahankara).
Cosmologically, he is hiranya garbha (golden embryo), the ball of fire, from which the universe develops. He is Prajapati, since all creatures are his progeny. He is:

Mythologically, Brahma springs from Kamala (lotus), from the nabhi (navel) of Vishnu. His consort Saraswati manifested out of him and all creatures of the world resulted from their union.

Brahma manifested to dispel the darkness enveloping universe. He created water and deposited a seed that became a golden egg. He divided the egg into two parts to construct the heaven and earth, and created the tenPrajapatis, mind-born sons, who completed the work of creation.